The built environment accounts for approximately half the energy use and carbon footprint of the United States. Lean Buildings reduce energy flows by tapping basic natural heating and cooling techniques and renewable energy sources in ways that are region-specific and climate-sensitive. Seven defensive and offensive strategies — from use of local and recycled materials to heavy insulation, from building orientation and passive solar systems to dense urban configurations — address the reduction of material and energy consumption in the U.S and similar climates. Issues of energy quantity and quality, energy codes and metrics, as well as building size and configuration, are also discussed.

Matter and Energy, Quantity and Quality, Defense and Offense

Lean Green engages both energy and ecology. This paper focuses on material and energy consumed by the building sector, the latter of which is estimated to account for up to half of the American energy pie. The seven principles below address buildings — especially smaller buildings — across all climate zones in the U.S., although places that are extremely cold, hot, or humid need further elaboration. They also apply to similar climate zones throughout the world, but some of the principles are reversed in the southern hemisphere.

There are two ways to measure energy use: by quantity (BTUs, watts, etc.) and by quality (its relative temperature or intensity). The principles are primarily about reducing the quantity of energy used. However, the passive solar systems mentioned use relatively low temperatures for space and water heating, and are therefore more thermodynamically elegant than fossil-fuel-fired systems. The principles focus on thermal, as opposed to luminous and electrical energy, and include energy embodied in buildings and the energy consumed heating, cooling and lighting them.

Although there has been significant progress in cutting energy use in buildings, there is a long way to go to wisely steward our energy resources and to mitigate and adapt to Climate Change. We need Lean, simple and understandable ways to do more with less energy. This leanness is all the more essential as we run out of low-hanging fruit and have to reach higher for gains in energy conservation and efficiency. The lowest fruit is reducing the energy demand of buildings. A BTU or watt saved — the negawatt — is far cheaper than one produced, even energy from “free” energy sources like wind and solar. So defensive strategies — primarily insulation and weather-stripping — usually have the quickest economic payback, and are among the leanest techniques. Reused and recycled building materials and components are Leaner than new ones, especially synthetic and high-tech materials whose manufacture requires high energy and chemical inputs. Downsizing buildings is always Lean. Urban buildings that share walls, floors and roofs require less heating and air conditioning per person, as well as less building material and maintenance. Even Leaner is renovating or retrofitting an existing building, rather than building a new one. Leanest of all is opting to neither renovate nor build, and to make do with existing buildings.

Offensive strategies include renewable energy, typically solar and wind, although geo-thermal, biogas and biomass are cost-effective in some regions. The sun is an intensive light source, and its most common and effective architectural use is to illuminate building interiors. Passive solar heating systems — in which the building itself collects, stores and distributes heat — are typically Leaner than active solar systems, whose panels are added componentry to a building and require fluids, pumps, thermostats and racks. Passive systems, such as attached greenhouses, direct gain, and Trombe Walls, are proven and cost-effective ways to heat space and domestic hot water in many climates. Photovoltaic cells (PVs) and solar hot water collectors can be added to the building, typically on the roof, where they can orthogonally face and even track the sun. Passive solar and PVs also emit no GHGs or other pollutants (except in their manufacture and construction).

Solar radiation is intermittent, diffuse and relatively weak compared to fossil fuels (which are exceedingly power-packed and should be utilized much less cavalierly). Nonetheless, the sun’s rays are intensive and frequent enough to provide ample light, heat and electricity for buildings. PV panels have dropped dramatically in price and are increasingly competitive with utility-provided electricity in many places. They are already part of the Lean Building repertoire in sunny regions and in remote, off-grid locations.

Energy codes, regulations and red tape have steadily increased over the decades. Both mandatory and voluntary, they have significantly reduced energy consumption but added to the bureaucratic delay and hassle of design and construction. They include LEED ratings, which are voluntary but complicated and expensive. Moreover, they consist of a laundry list of criteria, which is more reductionist than integrative or synergistic. AIA2030 is a simpler, less expensive and more workable voluntary rating system, as it focuses almost solely on reducing GHGs and ultimately making buildings carbon- and energy-neutral. BREEAM, developed in the UK, is used in other countries. A simpler, more local and holistic regulatory regime would be welcome, even if initially limited to certain constituencies or Pink Zones within a city or town.

The metrics should also be Lean. Small buildings are typically skin-load-dominated, which means their thermal performance is driven by energy flows through their walls and roofs, which are intuitively understandable in most cases. Their performance can often be predicted by simple rules of thumb and charts. However, larger buildings dominated by internal loads (lights, equipment, people, etc.) typically need computer simulations during the design process. If energy consumption is to be calculated, BTUs/yr/person is an equitable measurement, as it accounts for oversized buildings, and it is also roughly equivalent to carbon footprint per capita.

These seven principles are offered as a Lean and irreducible list for designers and builders, as well as for the public. When further detail in actual, site-specific applications is needed, local expert advice is recommended.

To be Lean and green, buildings should:

1. Be built with local, low-energy materials and methods, and designed no bigger than needed.

2. Have an envelope capable of isolating or buffering it from heat, cold and humidity, consistent with the climate zone.

In temperate and cold climates, walls, roofs and floors should be heavily insulated, with double-glazed windows, as well as minimal air infiltration and cold bridges. Insulation has one of the highest paybacks of any investment, especially in smaller buildings with high skin-to-volume ratios. There should be a vapor barrier on the warm side of the insulation. Glazing on all faces should be covered at night with interior or exterior air-tight movable insulation, such as insulating curtains, shutters and panels.

Larger, multi-floor buildings have a more favorable ratio of volume to skin than smaller buildings and are thermally more cost-effective per occupant.

In hot, humid climates, wall cavities must breath to the exterior to prevent the build up of mildew and mold.

3. Face south with sufficient glazing to passively collect solar gain in the heating season, and have appropriate shading of south and west glass during the cooling season.

In temperate and cold climates, buildings should have the largest face oriented to the south, preferably within 20 degrees. Row houses and apartment buildings should be stretched east to west to maximize solar exposure. The south face(s) should be generously glazed, as each square foot of vertical double-glazing gains more heat than it loses over the course of most heating seasons. East, west and north faces should have minimal windows, no more than needed for daylight, views and natural ventilation.

At appropriate times of the day and year, glazing should be shaded with exterior fixed and movable shading devices, without compromising appropriate levels of daylight and view. In most climates, west-facing glass is particularly susceptible to visual glare and overheating, and benefits from interior window blinds and shades or exterior fixed or movable vertical louvers.
Green roofs, trellises and living walls can provide shading, as well as cool the air by evapo-transpiration, and detain storm water.

4. Have sufficient mass to store solar gain and to act as a thermal flywheel, radiating warmth in the heating season and absorbing it in the cooling season.

Where heating is needed, there should be enough thermal mass inside the thermal envelope to carry any excess heat gain from one day to the next. Heavy, dark-colored masonry with direct exposure to the sun is among the best thermal storage/flywheel devices, especially if it is also part of the building’s structural system (Trombe Wall). Water and phase change materials are useful for thermal storage, although they must be in secure containers.

Where cooling is needed during the day, there should be enough thermal mass inside or outside the thermal envelope to delay the arrival of the afternoon heat wave until cooler night air can ventilate the building. Interior thermal mass can help smooth temperature swings.

5. Be open to and induce natural ventilation when cooling is needed.

Cross-ventilation and chimney-effect, vertical ventilation should be used as needed to cool building spaces and building mass, especially at night when outdoor air is cooler in hot climates. Night sky radiation and evaporative cooling are especially effective in hot, arid desert climates.

6. Be adaptable over time, with materials and components recycled or reused at the end of their useful lives.

The building foundation, structure and shell should be built to last a century or more in order to shelter different users and needs over time. Buildings should be constructed of materials that are reusable or recyclable. Movable, short-lived and personalized building components should be flexible on a daily and seasonal basis, as well as adaptable over the years. Buildings should recycle gray water for toilet flushing and irrigation of plants. Occupants should recycle inorganic and compost organic waste, as well as minimize water consumption.

7. Employ the first six principles preferably in urban settings and in ways that are site-specific, context-sensitive and that do not conflict with common sense or prevent other buildings from employing them.

Because of smaller surface area per occupant, party walls and shared floors and ceilings reduce energy use in the heating season, and when air conditioning is used in the cooling season. Urban buildings often contain less embodied energy and require less energy to construct and maintain per person.

Daylight and solar access for neighboring buildings should be blocked as little as possible. Buildings can slope or step down to the north to cast shorter shadows.

Last, but far from least, if the building is located in an area that has few amenities and services in easy walking/biking distance or is not well served by transit, automobile dependence can offset the energy and climate benefits promoted by these principles.

These seven principles of Lean, energy-efficient buildings will increasingly prevail as energy prices rise, and as good exemplars are built in different climates. 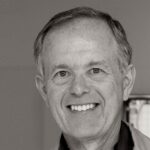 Douglas Kelbaugh, Professor and former Dean of the University of Michigan’s Taubman College, was principal from 1977 to 1985 in Kelbaugh and Lee, an architecture firm that won 15 design awards and competitions while pioneering passive solar design. As Chair of the Architecture Department at the University of Washington and principal in Kelbaugh, Calthorpe Associates, he edited The Pedestrian Pocket Book and authored Common Place: Toward Neighborhood and Regional Design and Repairing the American Metropolis. He co-edited The Michigan Debates on Urbanism in 2005 and Writing Urbanism in 2008. While on leave in 2008 – 2010, he was Executive Director of Design and Planning in a Dubai-based development company with projects throughout the Eastern Hemisphere.