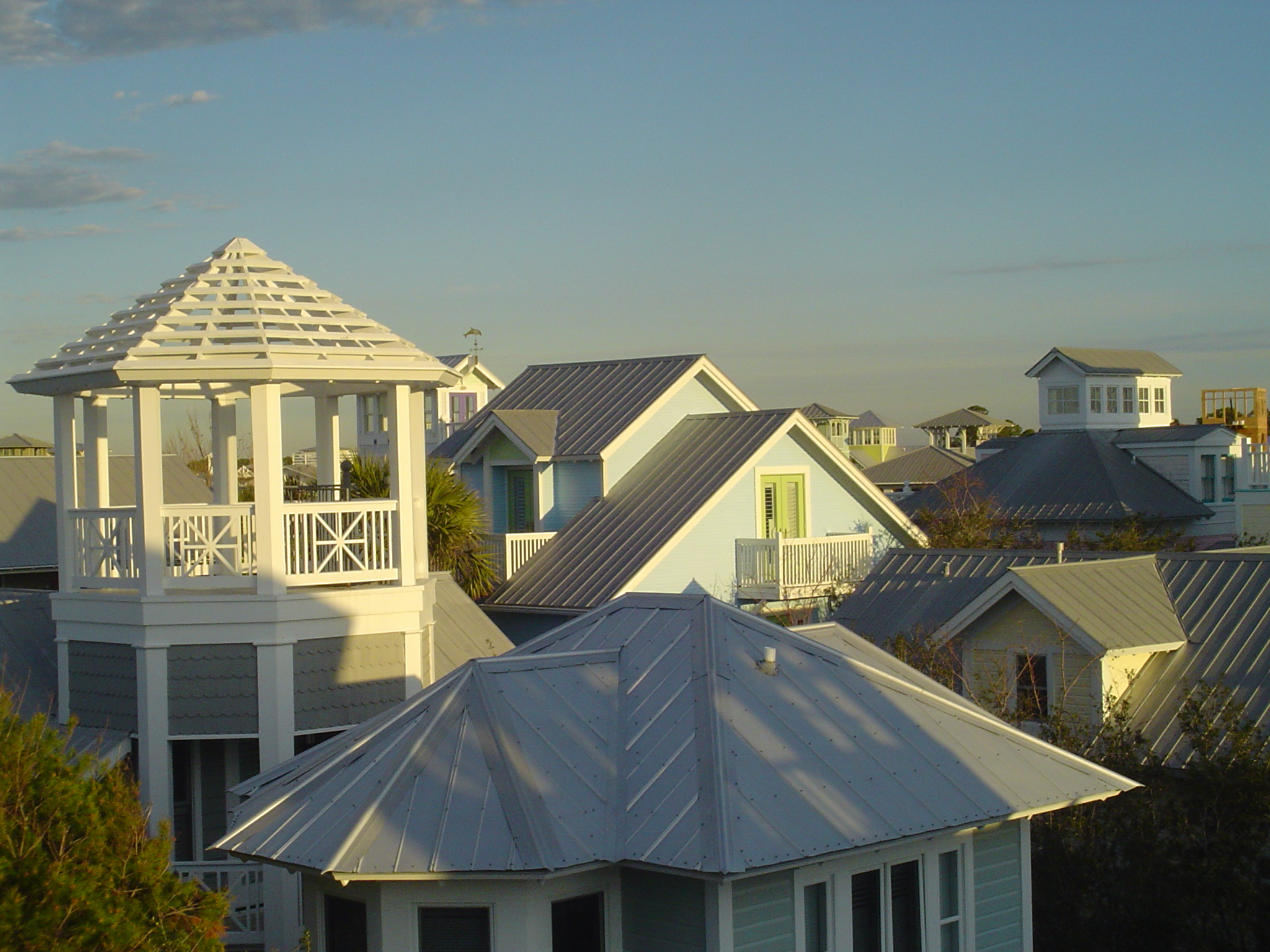 Seaside – A Case of Lean Urbanism for Greenfield Development

Seaside, the resort town in the Florida Panhandle, is best known for being a compact, walkable, and diverse community, but it has also become known as one of the first environmentally designed new towns. It is now time for it to be recognized as a model for Lean Urbanism, particularly greenfield development.

Of course, the attributes of being compact, walkable, and diverse are fundamental to environmentalism in that they minimize the consumption of land, reduce off-site trips, and encourage walking and bicycling, creating an urban pattern that is inherently sustainable. But in addition to the inherent benefits of the community’s urban design, there are also several explicitly “green” design elements in this now-33- year-old town.

In constructing the town, neither farmland nor pristine wilderness was eliminated. The site itself was ugly and relatively fallow, having been logged a few years prior to development. No large trees existed, and the site vegetation consisted of brush and wild plants. The site plan itself set development back from the Gulf-front cliffs, preserving the site’s natural dunes before legislation made this mandatory. That sort of elementary precaution, which has granted the town natural protection from tropical storms, was usually ignored at that time.

Florida being hot, the town plan addressed the matter of ventilation at both the community and the building scale. Virtually all the streets run perpendicular to the shoreline, channeling the prevailing breezes deep into the site. The vernacular architecture — particularly of the early buildings — allows windows to remain open even during rainfall by providing overhangs and porches. When possible, the vernacular plans also facilitate the cross-ventilation of rooms, allowing for natural cooling across the houses by the wind. For the wintry days, the earliest houses had Franklin Stoves to provide heating that was picked up and dispersed by the HVAC system. All houses are also raised off the ground, thereby providing the cooling effect of an under-croft.

The galvanized metal roofs — then quite uncommon except on the poorest of rural buildings — pioneered a long-lasting, cost-effective alternative to the less wind-resistant asphalt shingles of the then vernacular. Their very high reflective abilities also assisted in cooling the structures. Beyond that, the rigorous insistence on proper construction and natural materials resulted in a fortified construction well before the newly adopted hurricane codes. This emphasis on quality construction and materials kept Seaside largely unscathed through Hurricane Opal and half a dozen other direct hits that damaged neighboring developments. The town plan also offered innovative stormwater management techniques at both the large and small scales. Most of the community’s storm drainage flows into the central square, which is depressed, thus acting like a retention pond at peak times in the rainy season, and incidentally forming a very popular auditorium. At the building scale, houses are raised on posts to preserve much of the ground plane for percolation, allowing the existing contours of the land to be preserved intact. The already narrow street pavements are also made permeable by brick laid on sand with slight filtration interstices separating each one, with the beveled edge profile of the brick providing some water detention capacity. The on-street parking throughout the community, aside from at the town center, is placed on gravel swales, which extend the permeable land surface. The town’s landscaping consists entirely of native species, aside from the lawns and squares, which are restricted in order to provide a play surface and seating for outdoor events. The original scrub oaks were retained, and a program of supplementary landscaping is confined by code to native plants. This practice both preserves the landscape and minimizes maintenance, as the native plants require no irrigation and little maintenance for months on end. The code also threatens fines to those disturbing the landscape six feet beyond the building footprint. For this reason, builders dug the pier footings of the houses by hand, as larger equipment would have eliminated the contours of the existing ground. Although LEED standards certainly did not exist at the time of Seaside’s founding, the economic rationale, derived from vernacular practice, intrinsically endowed the town with strategies that address today’s most pressing environmental concerns. After all, our ancestors had neither energy nor money to waste. They had to do things right. There is still much to be learned from their lowtech approach to building community, even as high-tech environmental gadgets and building materials become more available and are commonly used by builders and developers.

Writing a new zoning code is time-consuming, politically fraught with landmines, and therefore unlikely to happen in most places. But with a limited number of strategic adjustments, many zoning codes can be repaired to allow Lean Urbanism and improve or create walkable, livable environments.

Housing can create wealth for existing and new residents. It can also create opportunities for growing, improving, or preserving a neighborhood. House hacking is a powerful tool for Lean Urbanism. It helps overcome the barriers to entry, and accomplishes individual and community goals.

We created this House Hacking Catalog to show how it’s possible and to provide inspiration, information, and ideas to make it happen. It contains descriptions of the types of buildings, rentals, and construction that make good options for house hacking, plus issues to consider including financing and finding the right property, as well as additional resources.

Savannah is hosting one of the national pilots by the Project for Lean Urbanism. The project sponsor is the Savannah Development and Renewal Authority, with support from elected officials, municipal staff, nonprofits, and neighborhood leaders. In Phase 1 of the pilot, a team from the Project for Lean Urbanism visited Savannah multiple times to identify obstacles to small-scale economic development. In Phase 2, a week-long workshop was held to establish an Action Plan and Lean projects in two Pink Zones within the city. This is the final presentation from the workshop.

Lean Urbanism is a way to restore common sense to the processes of development, building, starting small businesses, community engagement, and acquiring the necessary skills. The Project for Lean Urbanism is collecting and developing tools and daylighting techniques to enable and encourage those activities. This collection is the result of a survey to identify tools developed elsewhere and to track ideas for those that are needed. As tools are developed by the Project for Lean Urbanism, they will be made freely available on this website.

The Pink Zone – Where Small Is Possible

The Pink Zone is a powerful tool for concentrating resources on the task of enabling small-scale, community-centered development and revitalization. It defines an area of focus, leverages a suite of available tools, and provides a platform for the community to gather resources, make commitments, and work together on projects that enhance community character and allow existing businesses and residents to remain and profit from the improved quality of life. The Pink Zone tool will be developed and refined in a series of pilot projects, and then released to the public.

The City of Phoenix has become a model of Lean Governing, demonstrating the benefits of community revitalization when a municipality enables and encourages the work of creative entrepreneurs, small developers, neighborhood leaders, and community organizations. Along the way, it has employed and refined a number of principles and techniques that other cities can use to revitalize their neighborhoods. Phoenix is demonstrating that small projects can lead to big results.

The Lexicon of Lean Urbanism

The Lexicon of Lean Urbanism defines the “terms of art” and other useful words and phrases that have emerged from extended discussions on the online Lean Urbanism discussion group and at Lean Councils. The first section is dedicated to these terms, and the second presents a selection of helpful quotations.

Lean Urbanism and the Right to the City

The potential for a natural partnership between Lean Urbanism and social-justice groups is self-evident and should be explored. A growing movement of social-justice organizations across the world are coalescing behind the concept of “the right to the city” as a means to garner support for a wide range of social issues that can be characterized by a belief that everyone has a right to design and shape their community. These groups have the energy and determination to alter the status quo of financial and regulatory structures that prevent people who lack access to resources and capital, such as millennials and immigrants, from becoming active in small-scale development. But these groups often also lack the technical knowledge to achieve such goals. Lean Urbanism can provide tools and know-how that these groups need.

Regulatory barriers make housing less affordable to millions of households in the US and abroad. If regulatory barriers were reduced, small developers could provide housing at more affordable prices. This article assesses the current state of knowledge about the effects of federal, state, and local regulations on the supply and cost of housing.